Things To Be Aware Of Before Converting To JSmol

Of course there are huge advantages to using JSmol:

JSmol is slower than Jmol

JSmol is significantly slower than Jmol. Rotation will be jerkier. Smaller molecules (<10,000 atoms) are handled quite well. Large molecules (>20,000 atoms; see table at right) may be slow to load and process. (Sometimes Iâve seen delays of up to a minute, even more, during which JSmol freezes. These delays tend to happen with large molecules but are not simply related to size.) Multiple-model ensembles (such as from NMR experiments) may cause JSmol to freeze while taking minutes to load the ensemble, or loading may never finish.

Here is how two websites that now use JSmol by default have handled these issues:

JSmol runs in the javascript of the browser (HTML5). Different web browsers operate JSmol with very different performances. Chrome runs JSmol best, Safari is good, and Firefox is usually OK (see note under table below). Internet Explorer is unacceptably slow (all versions, including version 11), and it is the most widely used browser. In Opera, rotation of the molecule is slow and jerky.

The findings below are based primarily on tests with FirstGlance in Jmol, and possibly results may be different for other JSmol websites. 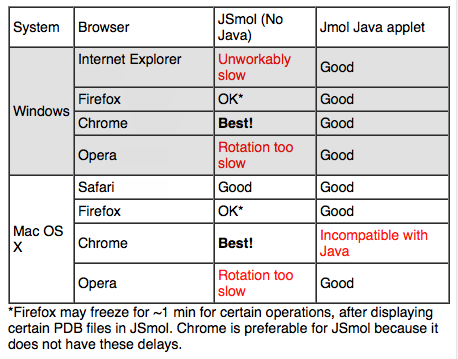 The above snapshot is taken from FirstGlance in Jmol. For more details, see the section Browser Pecularities in the Notes for FirstGlance.